Development is on the anvil and this comes from the world of Yield Farming.

We first get to the gist of the news and then we will explore this in detail. More than $250 million in Binance coin has been reported to be staked to farm Bella Protocol (BEL) tokens. Binance has come up with its latest launch pool feature to offer a much more secure form of yield farming. The launchpool will apparently help investors to stake BNB, USD, and other tokens that belong to new projects coming.

Let’s get into the details.

Bella Protocol (BEL) officially launched token farming on the Binance launchpool yesterday at 0:00 UTC. Ever since the latest announcement was let out, the investors on the platform have already staked over $250 million in Binance coin (BNB) to farm Bella Protocol (BEL) tokens. The entire feat was achieved in less than 24 hours.  We had previously reported that Binance has launched its launchpool feature which intends to offer a more secure form of yield farming. Binance has achieved this milestone and has informed its users of the same through a tweet. 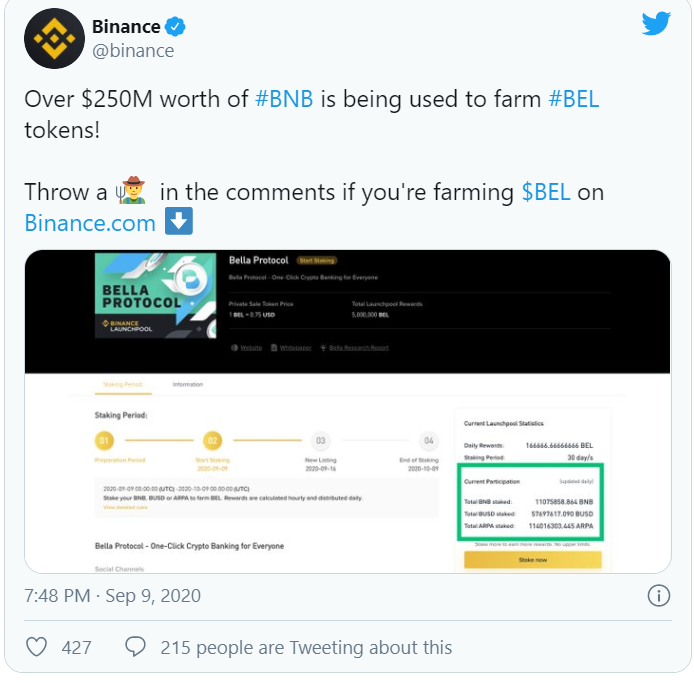 The BEL protocol launchpool site page will help you understand how many and in what value diverse digital assets have been staked to date.

Why Binance launchpool is a smarter way to farm new assets

Binance has been aggressively launching and promoting new products to keep up with the DeFi mania. It has listed multiple DeFi tokens including SUSHI for which it has received some criticism. But Binance believes that at this juncture it is important to take risks because only then disruptions will happen. In order to give direction to the growth of yield farming which is progressing at a lightning speed, Binance had introduced Launchpool securing the platform for the users to farm new assets.

Binance has been looking at newer avenues for acquisition and introducing newer products that will add to the success story of DeFi. With its newer launches, it aims to provide safer avenues for an investor to get into DeFi and Yield farming without facing any causes of additional risk as was seen in the case of the much controversial collapse of Yam Finance (YAM  and the very recent SushiSwap massacre. The Binance launchpool will give users the much-needed ability to remove their stake whenever they want which is very much in sync with the current processes of Yield Farming.

Talking about the BEL protocol (BEL), staked assets will be recorded over a 30 day period and rewards in BEL will be allocated daily depending on which pool the user decides to participate in. BEL will be listed on the 16th of this month and the trading will open for BEL/BTC, BEL/BNB, BEL/BUSD, and BEL/USDT pairs.

An ardent follower of crypto since 2017. Inspired by the fast pace tech advancements and adoption of blockchain in real world use cases. Bitcoin investor since bear 2018.

by Joseph Stone
September 9, 2020
Next
Cryptocurrency